Before the sun rises in Kennesaw, Georgia, the rippling of steady strokes can be heard as a single swimmer glides across the quiet water — keeping pace, stretching the lengths of body, breath and time before the chaos of a new day begins. For World Masters Champion swimmer, Malena Hankins, the days are full with a husband, four kids and three Aqua-Tots Swim Schools franchise locations to run. But she begins in the water.

On the heels of her most recent World Masters Swimming competition in South Korea in August, this 1st place medalist takes a moment to reflect on her swimming journey that began as a child in Ecuador and has traversed the globe, one swimming competition — and one swim school — at a time.

“My dad put me in swim lessons at four years old,” recalls Malena. “We had a pool in our backyard with a cement wall around it, and my parents couldn’t hear me if I fell in. So learning to swim was really important for safety.”

It was at this young age that Malena found her passion for swimming. “My family was very competitive and loved sports. By the age of nine, I won my first competition, and by the age of 14, I was swimming for the national team, representing Ecuador in swim meets throughout South America.” 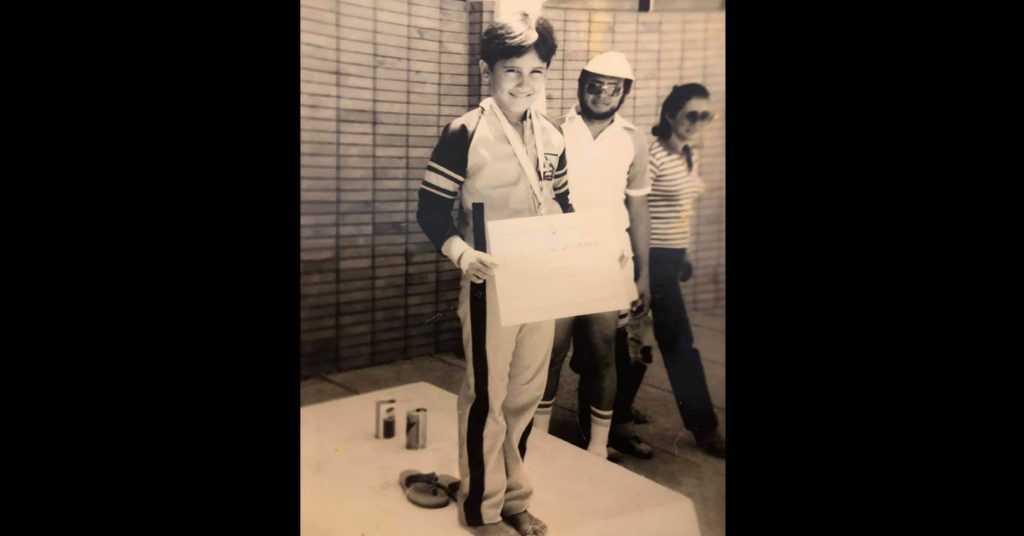 However, by 19, after swimming for Georgia Tech in Atlanta for two years, Malena found herself the proud mother of her firstborn son, and watched as competitive swimming seemingly drifted away in her rearview mirror. “I stopped swimming for 10 years. My family grew, and after three kids, I just wanted to lose the stubborn pregnancy weight that was lingering. I didn’t have any interest in going to the gym, so my husband encouraged me to start swimming again. But I didn’t want to just swim; I wanted to compete.”

And compete she did! One accomplishment after another…World Masters Swimming competitions in Sweden, Brazil, Italy and Hungary, a Masters Pan American record held for 8 consecutive years, a long distance open water swimming career for which she earned the title of National Champion for the 1 mile, 3 mile, 5k, 10k and 25k swim in the same year…one could say, the swimming champ was back!

By 2014, with her competitive fire thoroughly reignited, Malena embarked on the first leg of The Triple Crown of Open Water Swimming, a 28.5 mile counter clockwise swim around Manhattan Island, raising $2,250 to support drowning prevention. (Did we mention that she was pregnant at the time?!)

“After almost 9 months of planning and training, I completed a goal that I had my heart and mind set on for over five years. It pushed me towards the limits of my body, but God gave me the ability to swim and the tenacity to endure. I take no responsibility for my gifts or my abilities, but the decision to put them to use is what I am called to do.”

In fact, it was during her “swimming reinvention” that Malena discovered Aqua-Tots. “I was working in corporate America, making good money, but I wasn’t really happy. I was in the mix of raising small children, and they were my focus. While I was doing research about getting back into swimming, I realized that what I really wanted to do was teach children how to swim. So in 2008, I started teaching babies how to swim in hotel pools using the Aqua-Tots curriculum.”

Today, Malena owns three Aqua-Tots franchise locations in Georgia and Tennessee where her passion and mission for drowning prevention has come full circle. “I work hard and I play hard. I wake up every morning at 4:30am to work out, so that I don’t mess up my schedule with my kids and work. It’s a lot of sacrifice, but I’ll find a way to get it done anyway.”

And that is what we call a true swimming champion.